Cracking the mystery of the structure of reality is fun also for women.

She was the first to mention the idea of nuclear fission, which means that the nucleus can break into lighter elements, in 1934, on an article about Fermi’s observations of the bombardment of uranium with neutrons.
With her husband Walter Noddack, she discovered element 75, rhenium. She was nominated three times for the Nobel Prize in Chemistry.

Lise Meitner and Otto Hahn discovered nuclear fission in 1938. But Otto Hahn got alone the Nobel prize for this discovery, in 1944.

The experiments that provided the evidence for nuclear fission were done at Hahn’s laboratory in Berlin and published in January 1939. In February 1939, Meitner published the physical explanation for the observations and, with her nephew, physicist Otto Frisch, named the process nuclear fission. The discovery led other scientists to prompt Albert Einstein to write President Franklin D. Roosevelt a warning letter, which led to the Manhattan Project.
She also discovered in 1923 that an atom with an electron vacancy in the innermost (K) shell readjusts itself to a more stable state by ejecting one or more electrons instead of radiating a single X-ray photon. But this effect was named “Auger” effect after the man who secondly discovered it, Pierre-Victor Auger in 1925.

Maria Goeppert Mayer developed a mathematical model for the structure of nuclear shells, which she published in 1950. She shared one-half of the 1963 Nobel Prize for Physics with J. Hans D. Jensen, who made a similar work independently. 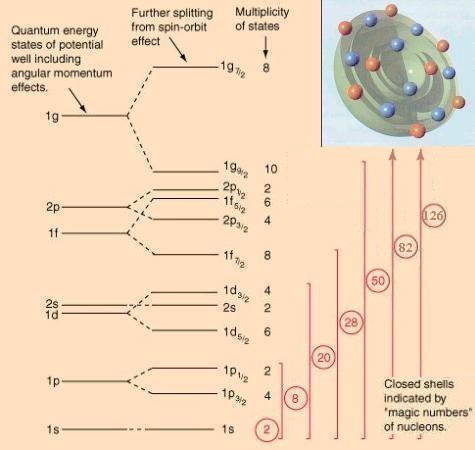 Observations show that the number nucleons required to have a “stable” atom (which means that the nucleons are less likely to break free), correspond to the “magic numbers”: 2, 8, 20, 28, 50, 82, 126.
The nuclear shell model offers an explanation by describing the atomic nucleus as being made of several layers of nucleons (protons or neutrons), just like the electrons around the nucleus. When one of those layers (or “shells”) is full, that is, when one of the magic number is reached, the atom is in a stable state. Predicting that nucleons spin and turn around the center, Maria Goeppert Mayer compiles mathematical formula used to describe spinning movments, which result in the “magic numbers”. Here is the way she describes this model:

Previously, she published an important paper on double beta decay in 1935.
In 1939, Enrico Fermi (creator of the world’s first nuclear reactor) asked her to investigate the valence shell of the undiscovered transuranic elements. Using the Thomas–Fermi model, she predicted that they would form a new series similar to the rare earth elements.
In 1942, she joined the Manhattan project. She researched the chemical and thermodynamic properties of uranium hexafluoride and investigated the possibility of separating isotopes by photochemical reactions. Later, she was given a position at Columbia with the Opacity Project, which researched the properties of matter and radiation at extremely high temperatures with an eye to the development of the Teller’s “Super” bomb, the wartime program for the development of thermonuclear weapons.
She also programmed the Aberdeen Proving Ground’s ENIAC to solve criticality problems for a liquid metal cooled reactor using the Monte Carlo method.

Chien-Shiung Wu provided the experimental proof that electrons have a preferential direction in a nuclear reaction known as beta decay.

This confirmed a theory of Tsung-Dao Lee and Chen-Ning Yang, and gave them a Nobel Prize in Physics in 1957. Wu was excluded.

During her studies, Chien-Shiung Wu made a thesis in two parts: the first part was on the electromagnetic radiation produced by the deceleration of a charged particle when deflected by another charged particle, typically an electron by an atomic nucleus. She investigated this using beta-emitting phosphorus-32, a radioactive isotope, using the cyclotron of the laboratory of her supervisor Ernest O. Lawrence. This marked Wu’s first work with beta decay. The second part of the thesis was about the production of radioactive isotopes of xenon produced by the nuclear fission of uranium with the 37-inch and 60-inch cyclotrons at the Radiation Laboratory. This will help her later to solve an issue with a reactor in the Manhattan Project.
Wu joined the Manhattan Project’s Substitute Alloy Materials (SAM) Laboratories, in 1944. The role of the SAM Laboratories, headed by Harold Urey, was to support the Manhattan Project’s gaseous diffusion (K-25) program for uranium enrichment.

Currently working at CERN, her team was key in the discovery of the Higgs Boson, called the particle of God.
Wu was part of the team led by Samuel C.C. Ting at MIT which discovered the J/psi particle in 1974, for which Ting was awarded the 1976 Nobel Prize in Physics together with Burton Richter.
Wu was a key contributor to the discovery of gluon. For her effort, Wu and her collaborators were awarded the 1995 European Physical Society High Energy and Particle Physics Prize.

Mileva Einstein deserves a special mention because she studied and worked together with her husband Albert Einstein when he published his most remarkable work, including the theory of general relativity.
In a letter to his wife, he writes:

How happy and proud I will be when the two of us together will have brought our work on relative motion to a victorious conclusion!
(Albert to Mileva, March 27, 1901)

Many other letters and witnesses confirm that Mileva and Albert were often working together. Every people who have experienced research or creation in any field, even personal, know that ideas mature better when we have the opportunity to debate them with someone else, especially someone we trust enough to make sure he/she will not steal our ideas.

What kind of “memoirs” did Mileva want to write, when Albert answers to one of her letters:

You did make me laugh aloud when you threatened me with your memoirs; doesn’t it occur to you that no cat would give a damn about such scribblings if the man you’re dealing with had not achieved something special. If one is a zero it cannot be helped, but one should be nice and modest and keep one’s trap shut. That is my advice to you.
(Albert to Mileva, October 24, 1925)

Melissa Franklin: While working at the Fermi National Accelerator Laboratory in Chicago, her team found some of the first evidences for the existence of the top quark.
Lisa Randall: Her research includes elementary particles, fundamental forces and extra dimensions of space. She contributed to the Randall–Sundrum model (a model of cosmological forces), first published in 1999 with Raman Sundrum. She published successful books of particle physics and cosmology. See on youtube one of her talk about her book “Knocking on Heaven’s Door”
Eva Silverstein: She is best known for her work on early universe cosmology, developing the structure of inflation and its range of signatures, as well as extensive contributions to string theory and gravitational physics.